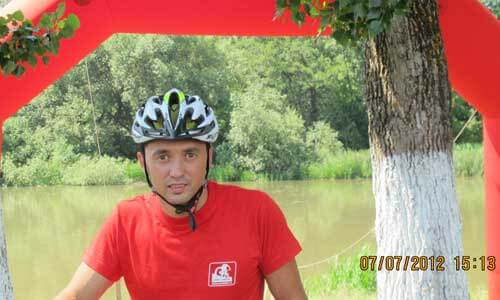 Participation for the first time for coach George Munteanu, Luna Sports Club coach in two triathlon competitions. The first took place on the 7th of July, in Targu Mures, the second stage of the Bioeel Triathlon Grand Prix Romania circuit, where George Munteanu attended the long triathlon tour marked as A + and succeeded to a place 14th at the 30 – 39 years’ category and 29th overall out of 137 participants.

The second was the exterra National Triathlon Championship at the St. Ana Lake: 14th of July 2012, the off-road trial: 900 m swimming – 23 km biking – 6.2 km running where he ranked 19th at the 30 – 39 years’ category out of 77 participants and 43rd out of 256 participants: “I’m happy with both results, it’s been a successful challenge, in my opinion, to participate in these competitions. For the first one I had to swim 1 km in Mures, bike 28 km and run 8 km, and for the second one even if the distances were smaller, the route was difficult because of the level differences in the bike and running trials”, said the coach and athlete George Munteanu.