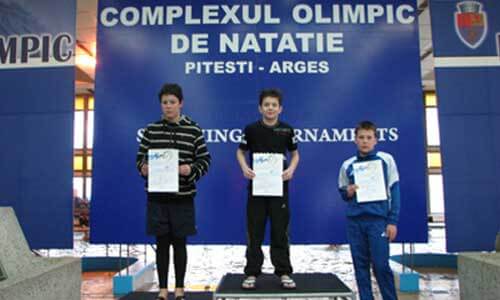 Raul Emanuel Neama obtained the the national champion title in Pitesti, four days ago. The kid is trained by George Munteanu, the young man who ventured two years ago, in swimming across the Bosphorus Strait. Between 20 and 22nd of March, in Pitesti, nearly 400 juniors competed in the National Poliathlon Championship for children. Brașov was present at this competition with two children, for the 11 years old category, who are currently training at the Luna Sports Club in Poiana Brașov, under the guidance of George Munteanu.

The next competition in which the club “Luna” will be present, according to George Munteanu, will be in Braila, the coach’s hometown, between 25 and 28th of June 2009. A former athlete, George Munteanu is the young man who, in 2007, succeeded in swimming across the Bosporus Strait, being the only Romanian participant in such a competition. He ranked 3rd out of 500 participants. His performance is not singular. In 2006, he swam 3 km in the gulf of San Francisco, which surrounds the feared prison of Alcatraz. Now, the young man established in Brasov, teaches swimming classes at the Poiana Brașov CS Luna Sports Club.