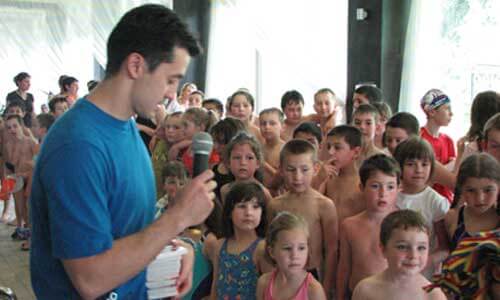 Last Sunday, right on the International Children’s Day, in Poiana Brasov, 55 children competed in a swimming contest. It wasn’t a national competition, but one between the current swimming clubs of Brasov, a state one and a private one – CSM Brașov and Luna Sports Club. The contest’s organizers were Luna’s Sports Club very own, who challenged the little swimmers of the state club in a “who’s who”. The competition was held at the Alpin Hotel in Poiana Brasov, and was structured by age categories: from those born in 1996, up to those born in 2003. The competition’s trials were also suited to their age. Thus, the youngest, born between 2000 and 2003 only entered two trials: 25 m freestyle and 25 m backstroke.

Those born between 1996 and 1999 engaged in four trials: 50 m freestyle, butterfly, backstroke, and arms. Eventually, most of the prizes were won by the private club swimmers. “The results were very good for the children trained at the CS Luna Sports Club, winning about 95% in the age categories of 2003, 2002, 2001, 2000, 1999 and 1998”, declared George Munteanu, the president of this private club. The children from CSM Brașov won for the upper age categories: 1996 and 1997. The prizes consisted of diplomas, medals, and sweet treats. “Basically, we wanted to do a check: about where our private club is situated compared to CSM, and the end results confirmed that our younger swimmers are better.

CSM has good older athletes, who are already performing well for 3 years now. We have started in Brașov only a year ago, and we already have good results”, adds George Munteanu. The competition held on Sunday was at the same time an exercise for a future participation at the national swimming championships. “One of the children recorded a personal record, so to say – Neama Raul, who recorded of time of 35 seconds and 5 hundredths of a second for the 50m freestyle trial. With such a recorded timing, he could easily occupy the podium at the national swimming competitions. I hope next year, the athletes from CS Luna to obtain at least on podium place”, says George Munteanu.