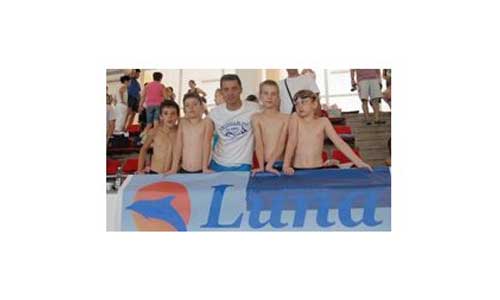 Sunday, June the 24th marked the ending of the first Children National Champhionship for 10 year old. It was an official competition, a national championship stage with 256 swimmers (135 boys) from 49 clubs in the country. The Luna Sports Club participants ranked among the protagonists of the competition, the 4 boys obtaining the 9th place in the relay trial, out of 22 teams present, and for the individual they stood out for the 50m crawl trial. Gheorghiță Andrei ranked 5th with a time of 32.88, at just 40 hundredths of a second distance from a podium ranking and Boni Massimo ranked 18th, out of a total of 134 athletes who entered the contest.

As George Munteanu, the coordinating coach, estimated last week, the Brasov athletes will be considered for the podium fight. They didn’t go to Arad as simple tourists, their performance captured the attention and recommended them for future competitions. Back in Brasov, George Munteanu said: “They are honorable ranking, but I expected more. As for Mihnea Drăghici, Alexandru Petrache or Massimo Boni, they achieved favorable, increasing time. Then, as far as Andrei Gheorghiță is concerned, he is a big hope for swimming. Well, if we look at his time in general, he should have ranked much higher. On the other hand, emotions are normal at this age, he’s at the beginning of his career, it was a large-scale competition involving 256 swimmers from 49 clubs. Overall, CS Luna ranked 21st, so in the first part of the standings, so we can say that we are on the right track in trying to coach high caliber athletes for our club and for Brasov.” Swimming doesn’t take vacations, so the athletes set up a meeting at the end of the next week at a new national championship stage, in Brăila, where children aged between 11 and 13 will compete.