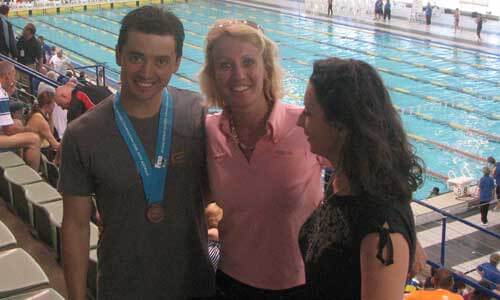 He swam across the Bosphorus Strait and in the water, he has lapped around the famous Alcatraz prison in San Francisco. George is now a swimming coach at a complex in Brasov and is looking for young talents.

He started swimming since 1st grade, but he had his first notable results in the 4th grade, when he became a national champion. He fought with passion and a lot of courage for performance, and managed to become a performance swimmer, which opened the doors to the world. “At first, I didn’t like swimming, and had a hard time learning. I come from the swimming pool in Brăila. I managed to perform through a strict regimen. I can say that I had a much more beautiful childhood than other children. Instead of kicking the ball around the block, I spent my time in the pool. Sport is discipline and the important thing is that you can see the world through it. I have seen Australia, America, Canada and Europe”, says George.

After finishing high school, George Munteanu enrolled in the master’s competitions. He was the first Romanian swimmer who participated in national and international competitions. “In 2002 I had my first going out. I was 23 at the time, I joined the Romanian polo team and I found out how wide the master’s movement is in the world. In 2006 I reached San Francisco. I obtained the 6th place at the World Masters, for the 3km trial and I can say it was a notable result”, said the swimmer. What amazed him was that at these competitions participated even elderly people, over the age of 80 years. “You will not see this in Romanian, and that because our retired people don’t go out of their way for physical activity. For the people there, life begins after they retire”, believes the swimmer. He swam across the Bosporus Strait in 2008, and lapped around the famous Alcatraz prison.

Also notable is the swimming across the Bosporus Strait. The young man reached Asia from Europe, swimming 53 minutes without stopping on over 6 kilometres. “There were over 500 participants from all over the world, Americans, Europeans, and Brazilians. I obtained a good timing and the currents helped me a lot”, says George. In the same year, the swimmer participated in other competitions, as well, in Slovenia and Romania, and in 2008 in Australia. “For me, these competitions are great, because at the same time I take my family with me and spend a few days off where I go. It’s very relaxing to combine business with pleasure”, adds the swimmer. Now George is a swimming coach at a complex in Brasov and is looking for young talents of Romania.

Questions and answers: Do you have athletes with notable performances? I discovered a very talented and smart child. He managed, at just 11 years old, to become a national champion, thing I didn’t do. I tried to look for other children, as well, because not everyone wants performance. There no longer exists the same motivation, when through sport you could go out and see the world. Who is easier to teach, adults or children? There is a bias that adults learn much harder to swim than children. My experience contradicts it: I haven’t had any adult who didn’t learn how to swim. Children learn very fast between the ages of 6 and 9 years old. What he likes: “I love ping-pong, the ticking of the ball on the table relaxes me very much. I could play for hours and not stop. I love everything related to sports. My dream is to travel around the world my whole life”. What he dislikes: “I don’t like eating grilled mititei. When people invite me over to barbecue, I don’t have a choice. I will go and play something, because I don’t like the atmosphere. I just think we can find something else more useful to do than sit around and drink beer, eat mititei, and possibly smoke. I don’t like the way of living in Romania, but I haven’t yet decided where I’ll go.”

Profile: born on the 6th of May 1979, in Brăila. Education: The Faculty of Political Sciences. Family: Married, a baby boy.