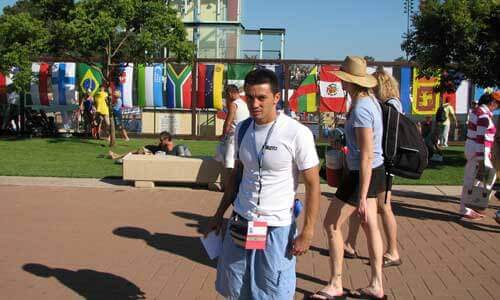 He is 28 years old, born in Brăila, and for about a year and a half he has become citizen of Brașov. He is the only Romanian who managed, almost a year ago, to swim in the gulf where the famous American prison Alcatraz is located. George Munteanu swam 3 km in the gulf of San Francisco, in a competition that brought together 900 participants from around the world. In his category, he ranked 7th. “I participated for the first time at such a competition. Basically, we swam around Alcatraz, because the water around is colder and there are sharks. In the area where the competition was held there were mounted nets against sharks. But that was the least of my fears. I feared more the waves reaching 1 – 1,5 meters high”, said George Munteanu. The swimmer, “adopted” by Brașov started practising performance swimming at the age of seven. During the summer, on the 22nd of July, he will attempt to swim across the Bosporus, in a competition carried out in Istanbul. In the competition, he will swim 6,5 km from the Asian shore of the Bosporus, to the European one. But for this weekend, the swimmer will warm himself up at the swimming marathon in Brașov.

One of his greatest desires is to make up a polo team in Brașov. For this purpose, he established a sports club. Because his priorities are swimming and polo. “Over the next two years we would like to enter the National Championship with a team of 12-year-old boys”, explains George Munteanu. For the moment, he is looking for athletes. “There is potential. At the swimming lessons I coach there are 5-year-old children who swim four styles. But they still need to grow. And we are still looking for sponsors. It’s a little difficult, though, because in Romania there is no clear law for sponsorships”, concludes George Munteanu. The Alcatraz Island is located in the gulf of San Francisco, and was the place of the most famous prison of all times.

Here were imprisoned known gangsters such as Al Capone (1934-39), Robert Franklin Stroud (1942-59), George „Machine Gun” Kelly (1934-51) and Alvin „Creepy” Karpis (1936-62). With a length of 500 meters and a height of 41 meters, the island is surrounded by extremely dangerous currents that make swimming impossible for the untrained ones. Officially, out of the Alcatraz prison no prisoner managed to escape. Those who tried were shot dead, drowned in the cold water, or were eaten by sharks. It is assumed that only one prisoner managed to escape, being carried by the powerful current North of the Golden Gate. The most significant performance related to swimming near the island belongs to a boy of only 9 years. A year ago, Johnny Wilson managed to swim the distance of 2.2 km that separates the famous island from the coast of San Francisco. With this race, he raised $ 30,000 for the victims of Hurricane Katrina.